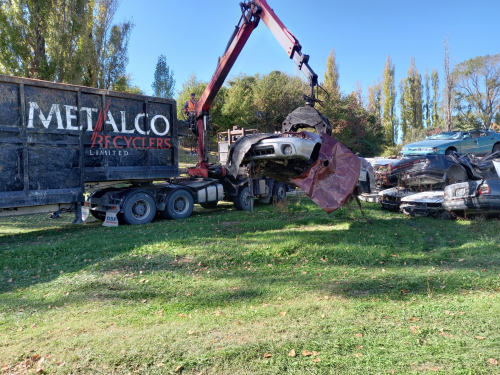 Council’s campaign of cleaning up abandoned car bodies has been recognised nationally at the 2022 LGFA Taituarā Local Government Excellence Awards.

The Wairoa District Council Toi te whenua, Manaaki ki te whenua project won the GHD Award for Environmental Leadership after coordinating the safe removal and disposal of more than 800 abandoned car bodies -that’s one car for every 11 people who live in the district!

The judges praised Wairoa District Council project describing it as a deceptively simple solution to an environmental issue grounded in geographical isolation and economic deprivation. They said the entry told a compelling before and after story, using an approach that the council is now extending to other areas of environmental management. They acknowledged that stories like this remind us that it takes more to achieve excellence than lots of money.

Council’s car crushing campaign was met with a massive swell of community support and even after the project was completed success continued with the community supporting the mahi and an additional 80 more vehicles collected and disposed of.

Wairoa District Council Chief Executive Kitea Tipuna praised the project and the team behind it. “This project has been a win-win for Council, the community, and the organisations that have contributed. It is one of the many projects Council is working on to support the protection of its environment and is testament to the big work being done by small Councils.

“As well as generally making the district look better, cleaning up car wrecks reduces health, safety and fire risks. Leaching of car fluids can cause environmental impacts plus there are potential fire and general health and safety risks from rusty cars and broken glass.

“This is about protecting the environment and cleaning up the district. We need to ensure that moving forward car bodies are correctly disposed of. I hope this campaign is a catalyst to stop this anti-environmental dumping happening in the future.”

Mr Tipuna said it is always great to have Wairoa’s local initiatives recognised on a national level and this is a tribute to the hard work carried out by staff and management who strive to do the best they can for the communities they love.

Wairoa Mayor Craig Little described the initiative as a great environmental contribution that demonstrates Council’s commitment to protecting the environment.

Taituarā Chief Executive, Karen Thomas, congratulated Wairoa District Council saying it is wonderful to be able to acknowledge the commitment to excellence and the contribution that projects like this make to shaping communities.