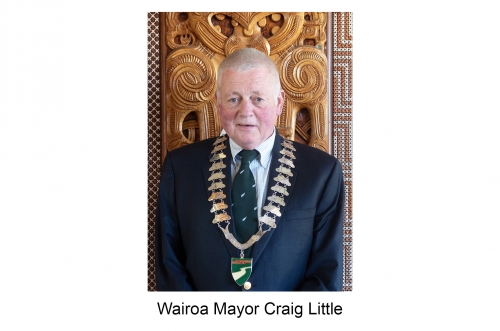 I believe there is a strong mandate from Councils and communities across our country for Government to abandon its costly and undemocratic proposal to change the delivery of New Zealand’s Three Waters services.

Central Government should now have received submissions from our 67 local authorities on its Three Waters Reform, and a test of the government’s good faith will be whether they honour their opt in or opt out process.

Once the government realises that it is to blame for the country’s Three Waters problems through decades of lack of external funding, and lack of a national regulator, then we will start to move ahead.

I urge the government to take a pause and think about what they are doing, and at the very least instead of introducing such significant change, hold a referendum to ask the people of New Zealand what they want in order to get some sensibility into the Three Waters Reform.

I believe the government has totally misread the public opinion around Three Waters and if it does not stop now, and think about the consequences of its proposal, then it has a huge risk of leaving a legacy of grievances around Three Waters for generations to come.

The Wairoa District Council has indicated a strong preference to pursue a Hawke’s Bay Three Waters Regional Entity. Based on current information we have provisionally ‘opted out’, until more accurate, reliable and contextually appropriate information is made available to ensure elected members and the Wairoa community, including tangata whenua, has confidence in the benefits as proposed in the Government’s reforms.

Key areas of concern were the assumptions that underpin the model used in the case for change where Council believes its specific data has been overstated; lack of meaningful engagement with community, including local iwi and tangata whenua, the dilution and lack of local voice in representation and governance; and uncertainty in the arrangements for funding/transfer of assets, ownership and responsibilities.

The government is proposing to confiscate our ratepayers’ assets and it is reassuring to finally see mobilisation from advocacy groups, opposition parties and members of the public. Surely the government must see this ever-increasing ground swell as a strong resistance to its proposal.

The Wairoa District Council’s financial position is better than a lot of councils, but if we are mandated to opt into ‘Entity C’ it will be like a big vacuum sucking our equity away from Wairoa to the bigger centres and it will be gone forever.

Wairoa is still waiting for a promised visit from government officials. On August 6 Minister of Local Government Nanaia Mahuta gave me a commitment in a Zoom meeting that she would send officials to Wairoa so they could gain information to enable a better understanding of our local Three Waters position. Now, two months on, and we have not heard from anyone about a visit.

There was a government pre-determination right from the start. This was evident with status quo ruled out from the outset.  You really do have to wonder what the hidden agenda is.

Councils around the country have spent significant amounts of ratepayer funds doing the government’s work of engaging with communities and iwi and providing feedback to the government.

The Government has failed to ensure local communities have been, and continue to be, informed about their Three Waters Reform proposal. The Wairoa District Council, like other Councils around the country, have absorbed the costs of ensuring its affected communities are aware of the reforms proposal because we believe it is imperative our communities, including tangata whenua, are informed appropriately about the potential impacts of this Government’s Three Waters proposal.

Surely our government should be concentrating on COVID-19 recovery, vaccinating our population and safely bringing our people home to New Zealand rather than Three Waters, Local Government, Health and RMA reforms.

It is also concerning that the government is not listening to communities. An example of this is the electric vehicles debacle. It is great to incentivise people to buy electric vehicles but why punish people who have no other option but to have these types of vehicles for their work. There has been no action regarding vehicle exemptions, and this is just another nail in the rural New Zealand coffin.

These centralised approaches, like the Three Waters entities, will destroy heartland New Zealand. We will lose localism as we know it, what is next? Councils losing roading and then regulatory services?

It seems ironic that the government wants to take localism away. The difference between localism and centralisation is that localism sees elected members chosen by communities to speak on their behalf, whereas in a centralised government, MPs have to align with their party’s views and tow the party line. Surely our local MPs don’t agree with the Three Waters proposal? But we haven’t seen any feedback from them so how would we know. I urge you to talk to your local MPs about the Three Waters proposal and see how you get on.