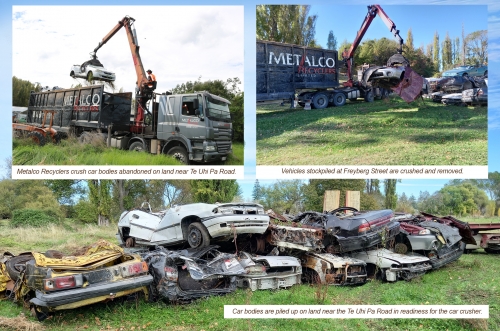 Council’s crusade to clear away abandoned cars is ramping up with around 50 vehicle bodies being crushed and removed.

Hundreds of cars are dumped throughout the district with Council partnering with the community to clean up the legacy of abandoned vehicles, and other illegal dumping.

Vehicles that had been abandoned at Te Uhi Pa Road, plus other wrecks from Freyberg Street and Crarer Street were removed.

The Council clean-up is prompting lots of community involvement with people phoning Council asking that abandoned cars be removed.

He urged people who wanted old, abandoned or wrecked cars collected to phone Council’s Trade Waste Compliance Officer George Ash and let him know the number of car bodies and location so a database for a co-ordinated collection can be developed.

“The more people who contact us about collecting car wrecks the better as the costs are minimised if there are enough wrecks in a specific areas to make it viable for them to collect the scrap metal.

“We are urging people in villages and neighbourhoods to liaise with their neighbours, who may also have car bodies to dispose of, so that the wrecks can be collected at the same time, making it efficient and economical for car removers.

Mr Mutonhori said the Te Uhi Pa Road site had a vast number of abandoned cars dumped there and it was fantastic to have these removed and the environmental risk to the nearby awa minimised.

“As well as generally looking better, cleaning up wrecks around the district also reduces health, safety and fire risks.

“This is about protecting the environment and cleaning up the district. Council wants to help correctly dispose of the car bodies, but we need a management plan going forward so this doesn’t keep on happening. It is key we have plans in place to stop this behaviour repeating in the future.”

Mr Mutonhori says Wairoa’s isolation is a contributing factor to the problem, as is lack of education around the issues an abandoned car can cause.

If you have a number of abandoned or wrecked cars to remove, call George Ash at the Council offices on 838 7309.  Council will accept single cars at the landfill at no charge, providing the person has applied to Council and meets the conditions and timing requirements for the vehicle drop off.