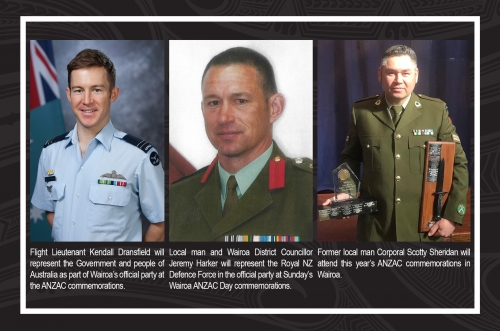 Wairoa people will remember those who have gone before them with a series of ANZAC Day services on Sunday, April 25.

A Dawn Service will be held at Kaiuku Marae, Mahia on the Mahia East Coast Road at 5.30am.

In town 9.30am services will be held at Taihoa Marae on State Highway 2 and at Frasertown in Carroll Street.

The Wairoa Civic Service will be held at the Wairoa War Memorial and hall at 11am.

This year’s Wairoa District Official Party includes representatives of the Royal NZ Defence Force and a representative for the Government and the people of Australia.

Wairoa Mayor Craig Little hopes as many people as possible will attend this year’s services to acknowledge ANZAC Day and remember those who have served.

“This year is particularly poignant, as last year we were unable to publicly acknowledge ANZAC Day due to lockdown. This year’s ANZAC commemorations will be extra special as we are again able to officially acknowledge our veterans and service personnel.

Colonel Harker enlisted into the New Zealand Army in January 1988 and began officer training at the Australian Defence Force Academy. He graduated from the Royal Military College, Duntroon in December 1991. He then joined the Royal New Zealand Infantry Regiment, in the rank of Lieutenant and was posted to 2nd /1st Battalion RNZIR Burnham Military Camp.

Colonel Harker has served in 2/1 RNZIR as a Platoon Commander, Mortar Officer, Staff officer and Company Commander. He has held a number of staff appointments in Army General Staff and Headquarters Joint Forces NZ. Colonel Harker also held instructor appointments at the Officer Cadet School, Waiouru and NZDF Command and Staff College. He was the last Commanding Officer 7th Wellington Hawke’s Bay Battalion Group in Napier and the first Commanding Officer of 5/7 Battalion, RNZIR. In 2013 Colonel Harker was promoted to Colonel and appointed the Commander, Training and Doctrine Command (NZ) Reserve Forces. In 2015 he joined the Ready Reserve, from which he has recently been appointed the Honorary Colonel of 5/7 Battalion, RNZIR.

Colonel Harker has deployed to:

Colonel Harker is currently People and Capabilities Manager at QRS and holds governance positions on organisations that support the Wairoa and Hawke’s Bay Communities.

Colonel Harker is married to Paula and they have three sons.

Flight Lieutenant Kendall Dransfield joined the Royal Australian Air Force in 2009 and attended the Australian Defence Force Academy and completed a Bachelor of Technology in Aviation. At the end of 2011 he attended the Australian Defence Force Basic Flying Training School in Tamworth, New South Wales to fly the CT-4 aircraft. Upon completion he moved to Number 2 Flying Training School near Perth in Western Australia to complete his flying training on the PC9. He graduated in August 2013 and began flying the Hawk lead-in-fighter training jet in January 2014.

Flight Lieutenant Dransfield was deployed to Al Minhad, UAE in 2014/2015 prior to conversion onto the C-130J Hercules. While being at 37 Squadron on the C-130J he deployed to the Middle-East twice where he worked closely with the RNZAF with Operation Teal. He also assisted in numerous Humanitarian Assistance and Disaster Relief missions predominantly in the South Pacific and South-East Asian region.

Corporal Sheridan is the son of Alex Sheridan and Lorraine Solomon.

He left the Regular Force in 2004 and re-joined the Army in the Reserve Force as a Supply Technician in 2019.