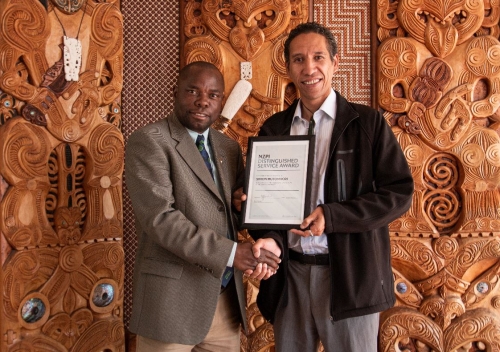 Mr Mutonhori received the institute’s Distinguished Service Award which recognises the outstanding results being achieved by members across New Zealand.

The 2020 awards acknowledge the impressive work of six members across the country who were nominated by their peers and unequivocally supported by the Awards Committee.

Mr Mutonhori also received an award earlier in the as one of two New Zealand Society of Local Government Managers (SOLGM) to be selected for the national award which is sponsored by BERL (Business and Economic Research Limited).

He said it is a great honour to have been selected by his peers for the award.

“The credit goes to my planning staff who saw it fit to put my name forward for consideration, I am very appreciative to work with such a supportive team.”

Mr Mutonhori’s career as a civil servant spans 26-years across Zimbabwe and New Zealand. As well as his planning experience and academic qualifications Mr Mutonhori is interested in matauranga Māori as it relates to resource planning in Aotearoa which motivated him to learn, understand and speak Te reo Maori. He now holds his NZQA Level 5 Diploma in te reo Māori.

He was born and brought up in a remote village in the Masvingo region in Zimbabwe and later studied at the University of Zimbabwe and Norway.

He has a background in agriculture as a land use planning specialist including aerial photo interpretation and conservation farming developing methods to use low input farming techniques to preserve land.

Mr Mutonhori moved to New Zealand in 2002 and joined Whangarei District Council as a Policy Planner.

He then worked for Te Arawa River Iwi Trust in Rotorua where his role was resource management adviser to the iwi, working mainly around the Waikato River Co-management agreement between all Waikato River iwi with mana over the awa, the Crown and Waikato Territorial Authorities.

From Rotorua Simon was offered a rare opportunity to join the Christchurch City Council where he was part of a small group of planners who drafted the Christchurch City Plan after the devastating earthquake. After the completion of this work, he moved to Ashburton District Council as a Senior Strategic Planner before moving to Wairoa.

Mr Mutonhori enjoys his work and being part of a good team that is supportive. I am proud to be working in Wairoa and able to contribute at the level I am.”

Wairoa District Council interim chief executive Kitea Tipuna said it is a real accolade to have an award of such high calibre awarded to a Wairoa staff member.

“Council staff put Simon’s name forward after hearing his life and work story. It is a real privilege to have been selected and I congratulate Simon.

Caption: Wairoa District Council Group Manager of Planning & Regulatory Services, Simon Mutonhori, (left) has been recognised with a prestigious national award by the New Zealand Planning Institute. He is pictured with the award which was presented by Council interim chief executive Kitea Tipuna on behalf of the NZ Planning Institute.