Seeing the results of the coalition government’s investment in Wairoa was part of a whirlwind trip by deputy prime minister Winston Peters on Monday afternoon.

The stop off was part of the Rt Honourable Winston Peter’s nationwide tour.

Mr Peters, leader of the New Zealand First party, was joined on the visit by his deputy, Fletcher Tabuteau, who has visited Wairoa on numerous occasions to make funding announcements. Mr Tabuteau has described Wairoa as one of the success stories for the Provincial Growth Fund where the funding that has been provided has made a real difference to the lives of locals.

The group visited a number of local initiatives made possible through Provincial Growth Fund investments.

These included the Digital Hub based upstairs in the Wairoa library, the Wairoa Digital Collective and Employment programme running from the former Clyde Hotel site and the main street revitalisation Te Wairoa e Whanake - Rise up and Grow Wairoa project.

The soon to be opened Digital Hub is another component of the Wairoa District Council’s goal to improve the district’s connectivity and digital capability.

The hub will feature 12 computers and deliver a range of workshops to help improve local access to technology.

The Wairoa Digital Collective and Employment programme provides a low-cost rural sourcing solution to New Zealand’s shortage of software developers which is currently driving development offshore. It also aims to transition Wairoa’s economy towards the rapidly growing technology sectors with a strong focus on creativity and innovation.

The programme provides 12-weeks of paid digital and technology-based industry training, including software engineering, programming application and game development followed by 40-weeks employment as a digital apprentice with at least 48 participants expected to enrol in the first two years.

The Rise up and Grow initiative is designed to have long-term benefits for Wairoa. It is built around four cornerstones: urban design; revitalising and diversifying the economic activity in Wairoa’s CBD; logical connections between people, spaces and character of buildings; and an environment that encourages high pedestrian counts, employment, training, profit and investment.

Wairoa Mayor Craig Little said Wairoa has had more visits from Members of Parliament and more investment into our community under this Coalition Government than ever before.

“By attracting visits from Ministers, they are able to see first-hand what our challenges are and help us to solve them. They are also able to see that when we do get additional support, we are turning that into real benefits for our communities.

Mr Little said it was incredible to walk a short distance, between the library and the former Clyde Hotel and see three new in initiatives underway and also celebrate the established businesses in town.

“Mr Peters and Mr Tabuteau both commented on what a good feel Wairoa had to it and I believe we can only keep building on this.

“Whatever the outcome of the upcoming general election is I hope that the focus remains as strongly on Wairoa as it has over the past three years.” 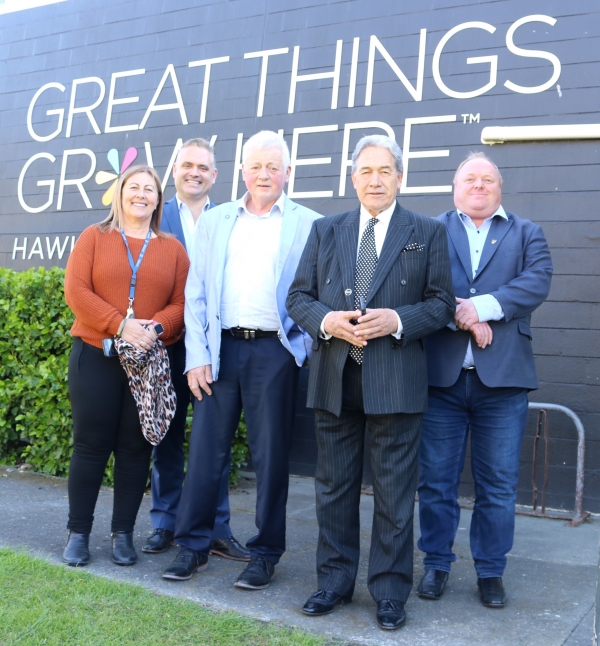