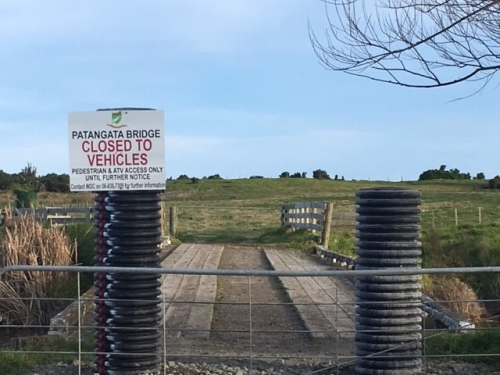 “Replacing the Whakaki Patangata Bridge with a heavy vehicle future proofed option is what everyone wants- it’s just a matter of working out how it is going to be funded,” says deputy mayor Hine Flood who chaired this week’s full Council meeting.

Mrs Flood praised the discussion by elected members at the meeting, the calibre of the information presented by Council staff and the support from members of the public who attended the Council meeting.

Last August, a routine inspection found the bridge abutments had deteriorated and the bridge was closed with only pedestrian and quad bike access allowed.

At this week’s meeting Councillors agreed to replace the bridge with a new structure capable of carrying heavy vehicles.

“The table was very clear about what we are trying to achieve; access, longevity and endurance for our Whakaki community, urupā, the affected landowner and economic development.

“While the existing bridge was built in 1950 as a Class One with a capability loading of no more than 2.5 tonnes, for safety purposes we need a future proofed replacement bridge with a heavy vehicle loading.

“We are conscious that whanau want continued accessibility and we do not want access compromised, including during the construction phase.

“If NZTA were to fund 75 percent of a new heavy vehicle bridge that still leaves a 25 percent shortfall so we need to explore other potential partners we can engage with.”

A report to councillors by civil engineering firm WSP shows repairing the bridge to the status quo - for vehicles weighing no more than 2.5 tonnes - would be the cheapest upfront solution at $110,000 but further maintenance would be needed in 10-15 years.

A new bridge for heavy vehicles, at a cost of $330,000, would not need additional maintenance for at least 40 years.

“We look forward to continuing our relationship with the Whakaki landowner and the community to arrive at the best possible outcome.”