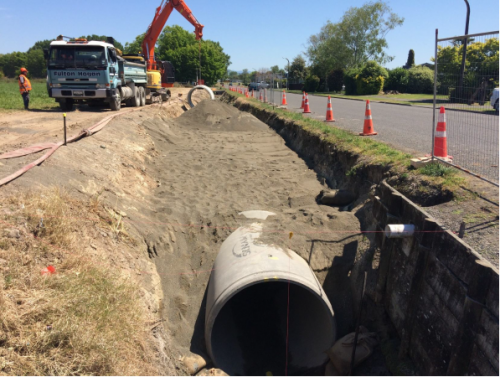 Piping of the open drain on Kitchener Street is underway with 23 new stormwater pipes now laid.

Piping and covering-in of the open drain has started from the top of Kitchener Street, near the town’s southern entrance on Achilles Street.

Council had already made a commitment to start piping the open drain with additional external funding secured under the NZTA road safety funding criteria enabling the piping to be extended to near the hospital and health centre.

Work on the first stage began at the end of last month with the project expected to take around 10-weeks to complete- weather permitting.

An eel relocation project is also running parallel with the piping of the drain.

The eel relocation is being carried out in partnership with Council, contractors Fulton Hogan and local whānau.

Wairoa Taiwhenua have also been involved carrying out checks and relocations.

Contractors Fulton Hogan thanked residents and motorists for their patience while the drain piping project is being carried out.

Caption: Work on the first stage of piping the Kitchener Street drain is well underway.