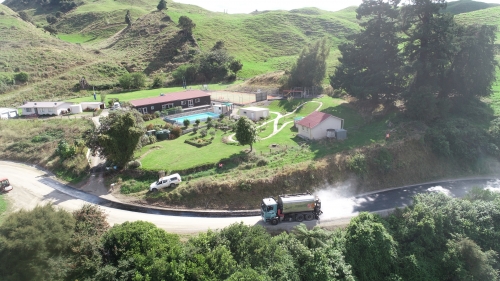 Tar-sealing the gravel road outside Putere School has helped alleviate a significant dust problem.
School principal Simon Greening said that at the beginning of last year the dust problem became so bad the students wrote to the Wairoa District Council asking for the road to be sealed.
“We did a survey at that time, and there were 21 trucks going past within a school day.

“We had dust from the unsealed road billowing into the school, schoolhouse, pool and air conditioning units plus of course the students were affected when they were outside.

“Following our letters Council got the ball rolling, and it turned out we were the last school in the district that was not on a sealed road.

“It is great to see the work has been done and we are looking forward to dust-free days ahead.”

Council Transport asset manager Libby Young said the Putere Road is a heavy forestry route with a lot of trucks and it looks likely high usage will continue for many years.

She said the 850 metre stretch of sealed road is designed for heavy vehicles and other improvements have included roadway widening and improved drainage.

“This stretch of road had been identified as a priority through Council’s road sealing strategy.

“The road was sealed on Tuesday, and it will definitely make a difference for the students at the school.

The $267,000 project attracted Wairoa’s 75 percent NZTA subsidy, and the work was carried out by Fulton Hogan.

“It’s great to have the job completed, it was a priority, and we know there will be a lot of benefits.”

Wairoa Mayor Craig Little said sealing this stretch of road is a real improvement. Putere is the last school on an unsealed road and there will certainly be benefits for the school pupils.

“I know there are other people throughout the district who are affected by dust on unsealed roads.

“The Council is trying its best to work through the prioritisation list and every stretch we seal is a step closer to the next job being started.”

Mr Little urges anyone who has concerns over unsealed roads to contact the Council, as situations and central Government funding criteria is always changing.