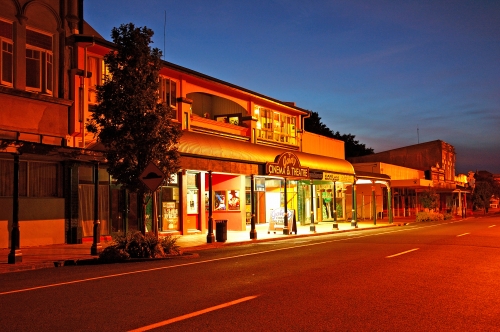 While there have been some background changes around the way the theatre is being run the Gaiety is still offering a great selection of movie time entertainment.

The running of the Gaiety was taken on by the Wairoa District Council on November 1.

Before that, the theatre was run by Te Matarae o Te Wairoa Trust (The Wairoa Horizon Trust) and managed by Zach Stark.

Mr Stark chose not to renew his contract, and as a result Council is now advertising for an operations officer for the day to day running of the facility.

Wairoa District Council, acting chief executive Kitea Tipuna, acknowledged the work Zac had done in keeping the theatre running over the past years.

“The Gaiety Theatre is a great facility and under Zach’s management has provided a lot of fun and entertainment for locals and visitors alike. We wish Zac all the best for his future endeavours.”

The transitional management phase will be carried out by Council economic development officer Annalena Atzwanger.

Immediate priorities include attracting volunteers to help out at the theatre and also improving community engagement and facility usage.

The theatre offers a range of opportunities for movie buffs and people in general who want to be involved with such a fantastic facility.

Mr Tipuna hopes there will be adults and students who will volunteer and want to be part of keeping the iconic facility ticking.

A survey will also be conducted to find out what people want from the Gaiety.

“A survey was conducted three years ago, but that was more around the movie genre, times etc. We want to build community engagement and want the Gaiety operating as more than just a movie house, this survey will be about asking the community how we can achieve that.

“The Gaiety has so much scope, it is a multi-functional facility and getting more people involved and using the complex in different ways will help make running it more viable.

“Council has initiated an operational review of the theatre and events venue, and it is important we ensure that moving forward there is a cost benefit to the community.”

Anyone who would like to be involved as a volunteer at the theatre or has ideas on other ways in which the theatre could be utilised should email Ms Atzwanger on a.atzwanger@wairoadc.govt.nz