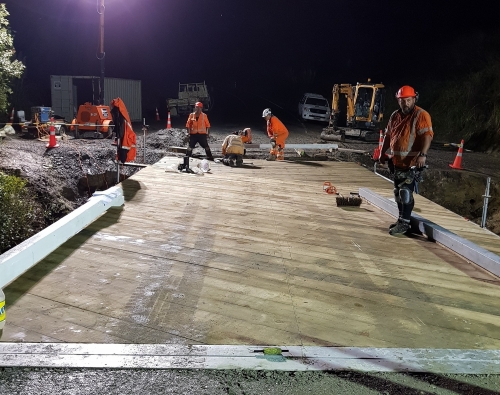 A woman in labour was one of the last people across the old Waitahora Bridge on Friday adding to the drama as Quality Roading and Services completed a bridge replacement in just three days!

Waitahora Bridge and Tiniroto Rd reopened seven hours ahead of schedule following the epic effort which saw QRS staff work around the clock in terrible weather to strengthen the 12-metre single span one lane bridge. 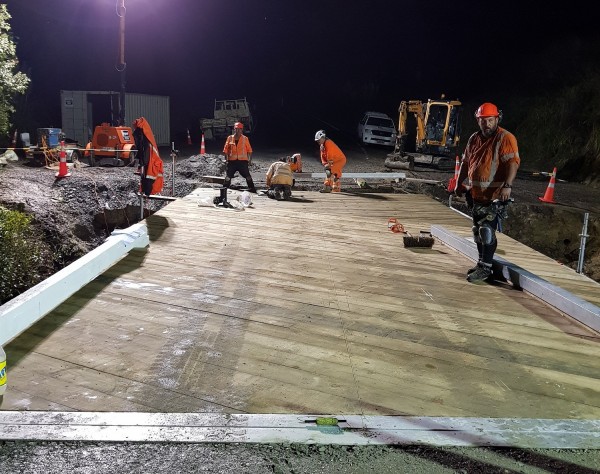 Waitahora Bridge is 2km up Tinoroto Rd from Frasertown. It was closed 9am Friday 11 May so work could begin on lifting the bridge deck and two outside beams from the bridge abutments.

There was an early problem to overcome when it was discovered the bridge deck and beams were too heavy for the CR Taylor crane to safely lift it, says QRS construction manager Mike Wilson.

“But part of the meticulous planning for this project for our client Wairoa District Council, was to have contingencies in place,” he says.

Rather than lifting it all at once, the deck was instead separated from all five beams below and lifted first. The two outside beams needing to come out were lifted separately.

“We were now a couple of hours behind, and then it began to rain,” says Mr Wilson, who spent months planning for the bridge replacement along with Wairoa District Council and local contractors and suppliers.

A torrential downpour dogged the five-strong QRS day shift. Rain continued all through the night making it slow going for the 5-strong night shift who worked predominantly on reattaching a new timber deck.

Mr Wilson says just before the road was closed a woman in labour driven by family members was waved through.

“It was pretty full on. That situation, along with some challenging issues around fixtures and fittings and a rising river, certainly made for some dramatic moments!”

Mr Wilson says despite the teeming rain and tough working conditions the QRS staff never complained and instead threw themselves into finishing the bridge replacement ahead of schedule. “They got stuck in, stayed safe, and the mood was always great.”

QRS chief executive Nigel Pollock has poured praise on the QRS staff who worked tirelessly to have the bridge reopened on time ensuring less disruption for the public.

“None of us is as smart as all of us and in this instance the teamwork displayed has led to a speedy safe outcome for everyone. Everyone involved can be very, very proud of their achievement.”

QRS was pleased to learn later that a healthy baby girl was born in Hastings hospital a day after they closed the bridge.