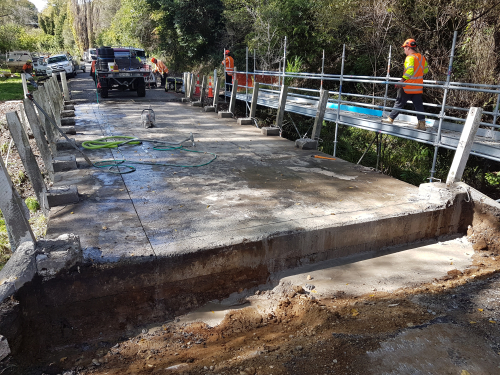 Wairoa District Council Chief Executive Kitea Tipuna said the project was a massive, but necessary undertaking, and support from the Provincial Growth Fund (PGF) enabled the work to be carried out without impacting ratepayers.

Mr Tipuna said this increases resilience for these isolated communities as strengthened bridges are less vulnerable to closure from high rainfall and storm events.

As well as improving load carrying capacity, strengthening works on aging structures hugely improve their condition and also make them less susceptible to closures from damage or deterioration.

Upgrading the bridges to carry HPMV increases productivity for the operators by increasing capacity, which reduces the number of heavy vehicles on the network.

“We are very grateful to the support from Kānoa. Their representatives could see the district, regional and national benefits of this project and they have supported us 100%. The completion of this partnership programme has been a great effort,” said Mr Tipuna.

“Over the duration of the three-year project, we have had challenges such as COVID-19 related lockdowns and illness, material cost increases and the impact of the March/April weather events. The fact that nearly a third of our bridges were assessed and nearly a quarter now meet the HPMV requirements is a great result.

“The project has also been a huge employment boost with contractors employing local people where possible with up to 10 people employed on the project at any one time,” he said.

Kānoa’s Principal Regional Advisor for Hawke’s Bay Cameron Osmond said a key focus of the programme has been to support regional development and increase productivity potential by improving links between the district and major transport hubs and market. The programme has also safeguarded and expanded visitor and business access and improved connectivity and access for communities by providing a resilient route that is fit for purpose.

“Ensuring bridges meet the HPMV bridge weight restrictions is an important part of Wairoa’s economy allowing key routes to be opened to heavier vehicles with improved load carrying capacity on the local roading network flowing into other social and economic benefits to the district and surrounding regions,” he said.

Wairoa District Council own 177 road bridges and culverts which have varying degrees of load capabilities. With a growth in the number of trucks crossing these bridges and an increase in truck weights, Council was required to assess every bridge in the district to ensure a safe and fit-for-purpose land transport network.

The project targeted bridges that were most critical to the Wairoa district which would provide improvements for freight movements, increased productivity and efficient transport connections, particularly in the forestry industry.

Photo image: Barker Bridge construction - The Barker Bridge on the Ruakituri Road was one of 42 local bridges assessed, evaluated and/or strengthened as part of a nationally funded bridge strengthening project