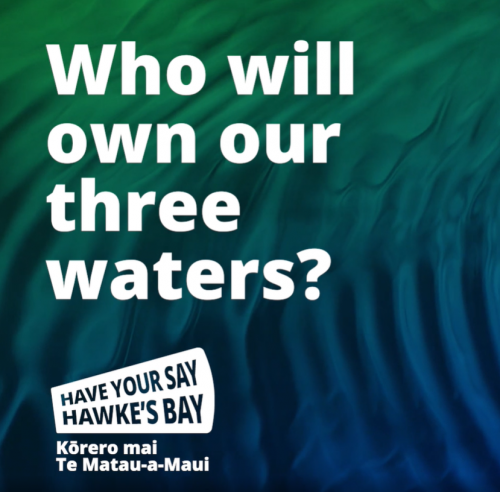 Councils from across the region have joined forces to launch an unprecedented public information campaign encouraging Hawke’s Bay people to participate in the upcoming three waters reform law-making process.

Dubbed “Have your say, Hawke’s Bay” the public information campaign aims to inform communities about the biggest changes to local government in more than a generation and encourage people to share their views with Parliament.

Craig Little, Mayor of Wairoa District Council says the legislative programme for three waters reform is not straightforward. “With two bills to be consulted on, and the timing for the second bill unknown at this stage, it makes for a very confusing and unhelpful submission process. It will certainly test the resolve of those who want to have their say.

“We strongly encourage Government to indicate when the second bill will come to the House and the specifics it will contain,” says Mr Little.

Alex Walker, Mayor of Central Hawke’s Bay District Council says the changes affect everyone. “Residents, businesses, iwi/Māori, rural and urban communities will all be impacted by these reforms, and for generations to come. We know many people in our communities are already familiar with what’s proposed, but we are acutely aware many aren’t. We feel a responsibility to ensure everyone has the chance to understand the scale and detail of the changes in front of them.”

Under the reforms, from 1 July 2024 responsibility for delivering Hawke’s Bay’s drinking water, waste and stormwater services would transfer from local councils to a super-entity covering 21 councils from East Cape to the top of the South Island and the Chatham Islands.

Kirsten Wise, Mayor of Napier City Council says that the first piece of legislation to establish the four public entities had its first reading yesterday, on 9 June. “It now goes to the Finance and Expenditure Select Committee, for detailed consideration and to receive public submissions.

“Have your say, Hawke’s Bay provides information on the detail of Government’s plans for our communities’ three waters services and explains how people can make their views known to the Select Committee. This is complex subject-matter, but we believe our communities deserve to know what’s proposed, what it will mean for them and how they can have a voice.”

Sandra Hazlehurst, Mayor of Hastings District Council strongly encourages people to fully understand the reforms and have their say. “Last year was the turn of Councils and we made very clear our position, on behalf of our communities. Government is now taking a legislative path so it is now time for our Hawke’s Bay people to have a voice on what they think should be the future for their three waters services.”

2. A second Bill – date unknown at this stage but within the next couple of months, enacts how the entities will operate.

Alex Walker says, “We’re taking this unusual step, because as Councils we are committed to making sure that our communities know what’s proposed. The Government has chosen not to engage directly with our communities, so we are stepping in to support the people of Hawke’s Bay with the information they deserve.”

In conclusion, regional Mayors say they strongly encourage our communities to get involved, to go to www.hb3waters.nz where we have a wealth of information about the reforms, and to find out how they can have their say as Parliament considers its decisions.