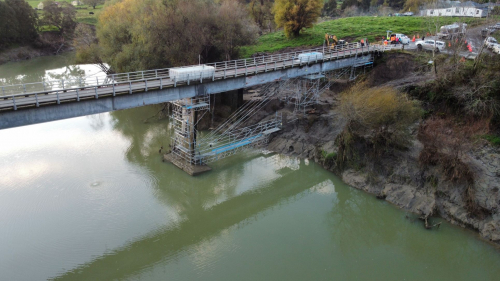 Just five weeks after the Te Reinga Bridge was closed due to structural damage, a temporary repair saw the bridge reopened to light vehicles on Wednesday.

Monday’s load testing confirmed the bridge was able to be opened to light vehicles with a three-tonne limit, which will include most cars and utes. Restrictions will include one vehicle on the bridge at a time, and a 10km speed limit. As part of the re-opening, size limiting frames were placed at either end of the bridge which will restrict large vehicles from being able to cross.

Wairoa Mayor Craig Little said temporary access for the Te Reinga, Ruakituri and Tiniroto communities has always been the priority and it is great to have achieved access within the indicated timeframe.

“Restoring access has been a true partnership effort from Council as the project drivers, WSP which provided the civil design and QRS which carried out the construction and support from Waka Kotahi NZTA.”

Mr Little thanked the community for their patience and also acknowledged the local people, particularly those from the local marae and community organisations, who have supported the work and workers.

“There is still a long way to go before the final work is completed and we need to be mindful this is a temporary solution and there will likely be more closures.

“It is great to have connectivity restored and this will take the pressure off the Erepeti/Ohuka/ SH38 alternative route and help alleviate the additional traffic on a Class 1 road, and we can now concentrate on the permanent repair of the Te Reinga Bridge.

An onsite acknowledgement of the restored access was held on Wednesday afternoon.

On Tuesday April 5, the bridge was closed to allvehicles due to the significant damage which included structural damage to two of the bridge piers.

The temporary repair was load tested on Monday, May 16 with a positive result and no major displacements or movements detected from any of the loads applied.

Two empty swimming pools sitting on the bridge deck were incrementally filled with water on Monday to see if the bridge could hold the engineers’ recommended weight for light vehicles to move across it.

During the test, information from a variety of sensors was electronically fed back to engineers who were monitoring the test from the road. Tilt sensors were mounted on the piers and the bridge deck to measure any movement of the bridge structure. Strain gauges placed on the tensioned bars currently holding the bridge up measured any stress they were under. Survey equipment was also used to measure if the bridge deck height was changing.

The water used to fill the swimming pools was pumped in from two water trucks parked at the edge of the bridge. The pumps were timed to flow rates so that one thousand litres (equating to 1 tonne) could be added at a time. The team decided against using river water as there wasn’t a safe place to set up the pumps and the height of the bridge presented pumping issues. In total 15 tonnes of water were added to the pools over six hours.

Quality Roading and Services project Manager Mike Wilson says the project has been challenging and interesting and driven by everyone’s desire to open the most direct link between Ruakituri and the rest of the region. “Now we just want the people of Ruakituri to be able to move freely again.”

QRS bought the pools second-hand on the website Trade Me. The previous owners were surprised to learn what they were being used for. “One previous owner offered us floating pool toys as part of the purchase, but we turned her down.”

Part of the re-opening included QRS installing size-limiting frames across the bridge to restrict the size of vehicles that can cross. Vehicles 2.5m and under will be able to use the bridge.