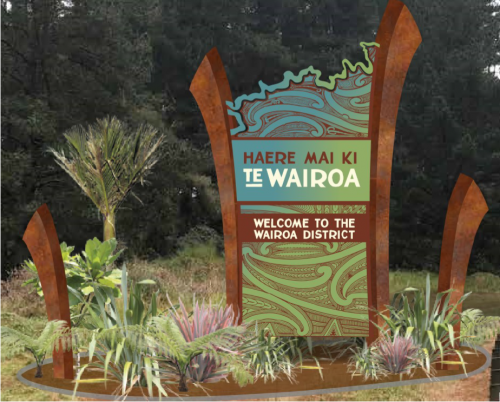 When you drive into the Wairoa district from Napier or Gisborne in the next two weeks, you’ll notice the new bilingual "Haere Mai ki Te Wairoa" boundary signs greeting residents and visitors.

The signs will be installed next week after more than two years of extensive community consultation throughout the Wairoa district.

Having completed stage one - Kohia ngā Whakaaro (Gathering your Thoughts) and Stage Two - Creative Development - the signs are the start of the third Stage - Implementation of the "Wairoa Visual Identity Project".

They were designed based on ideas put forward by the Wairoa community, including school students, community clubs and organisations, youth groups, business owners and managers, local artists and residents.

A prominent feature is a graphic outline of the course of the Wairoa River from its roots at the base of Te Reinga Falls to the river mouth.

Local artist Chance Rohe is the artistic mastermind behind the background design of the signs, reflecting te whenua (land) and ngā wai (waters) of the district, two key elements identified in the initial information gathering stage of the Visual Identity Project.

The green and blue colours used also reflect these elements. The signs will be lit by on-site solar panels which will make the signs very visible to night drivers.

An impressive three metres high by two metres wide, the northern boundary sign will stand on Wharerata Road and the southern sign will be erected close to Willowflat Road, near Kotemāori on State Highway Two.

Information signs at War Memorial Park in Wairoa and at Blacks Beach will also be installed in the next fortnight, with common elements used across all the signs.

As resources permit, more signs and other materials will be produced.