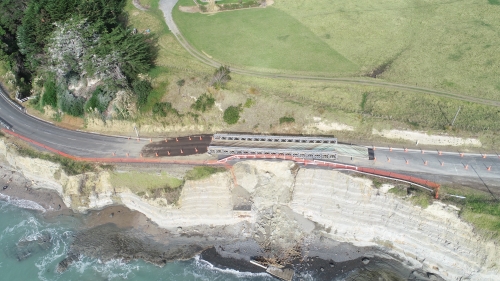 The Mahia East Coast Road will be closed at the Rangitahi dropout near the Waitepatu Culvert over the weekend of November 7 and 8 while the Bailey Bridge is removed.

There will be no access via this route from 8am on Saturday November 7, to 5pm on Sunday November 8. There is also no alternative access.

While the road is closed to traffic, people may be able to be assisted to walk through the site, but long delays are expected.

The temporary Bailey Bridge was installed in June last year due to the coastal site’s instability.

The bank along the coastline had become unstable and the old retaining/crib wall was failing causing the bank to continually fall away.

Installing the Bailey Bridge ensured the road could stay open while complex design work was carried out.

The design is now complete and project funding was announced under the COVID-19 shovel ready recovery programme.

Physical work is underway with a redi-rock block wall which will be tied to rock anchors being constructed in the dropout area.

The dropout repair work involves installing soil/rock nails, ranging from 2-8 metres in length, around the dropout area and within the dropout to strengthen the existing bank.

Shotcrete, a spray on concrete, will be sprayed below, and on either side of the dropout, to stop further erosion.

The $1.2 million contract is being carried out by QRS and every effort is being made to have the road opened to two lanes before Christmas.

Motorists are also advised that once the Bailey Bridge has been removed the site will still be reduced to single lane and under the control of traffic lights until the repair is completed.