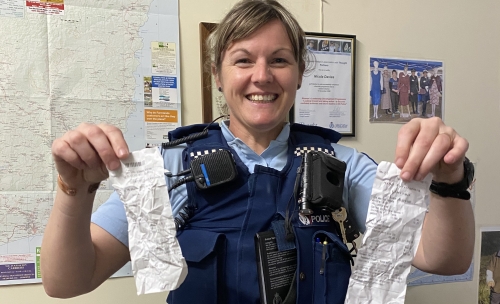 More than $100,000 was spent in the first week of the Campaign Rua Buy Local Campaign

The promotion supports Tautoko Wairoa which encourages people to shop and buy locally.

The original promotion was launched by the Wairoa District Council in June and incentivised more than $100,000 worth of local shopping and saw 10 shoppers each win $100.

The Wairoa Star has continued to support local shopping by donating $500 in prize money followed by a $200 pledge by Bradbury Jewellers.

To enter the new buy local promotion just spend $30 or more at a participating store and write your name and phone number on the back of your receipt and drop it in the entry box.

Each week one lucky shopper will have a chance to win a $100 credit to spend at a participating store.

Everyone is eligible to enter and the draws will be made by the Police.

On the photo: Wairoa Police constable Tamsyn Morunga drew the names of two lucky shoppers who each received $100 to spend at a participating business.