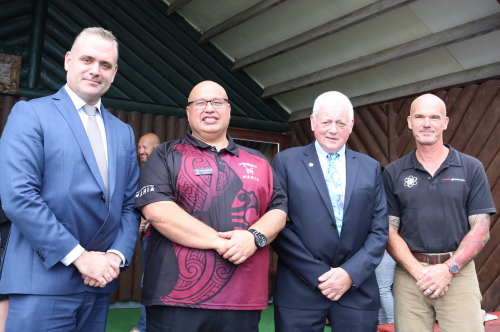 Mahia’s connectivity and roading network reliability has been given a massive boost through a $8.3 million Central Government investment.

Wairoa Mayor Craig Little said he is thrilled that through the Provincial Growth Fund the Coalition Government has been able to support Wairoa and Mahia.

“The Nuhaka/Opoutama and Mahia East Coast roads are critical routes for residents, holiday homeowners and tourists as well as businesses including tourism, forestry, farmers, retailers, other businesses and of course Rocket Lab.

“Both roads have been identified as being in need of urgent remedial works and this funding will go a long way to solving these issues.”

The Mahia Roading Resilience grant will see $6 million allocated towards 12.5 km of traction sealing, drains, culverts, safety and traffic improvements on the Mahia East Coast Road and $1 million to seal 4 km of the road on Onenui Station that leads to Rocket Lab Launch Complex 1.

The funding includes $1 million for a second coat of traction sealing on the Mahia East Coast road in 2021.

Mr Little said the $300,000 will support investigations to look at all the options for access into the Peninsula as well as the realignment of the Nuhaka/Opoutama Road.

“This road is an 11.3km sealed road with dropout areas, including the Blowhole, of over 1.7km caused by coastal erosion. The funding will investigate alternative routes to bypass these dropouts with a new route critical to ensuring certainty of access.

“The investigation will include assessing all relevant options to realign the road and include designs, consultation, and Geotech reports to produce a document that provides sufficient detail to assess funding options.

“These roading projects support regional economic development by investing in infrastructure that will support and accelerate the potential of tourism, space and forestry industries in our region.

“This will give us certainty and longevity which will provide economic opportunities resulting in increased local employment.

“Connectivity and health and safety for residents and tourists will also be improved.

“Once again this Coalition Government has seen the benefit of investing in rural areas like Wairoa and we are appreciative the government realises the potential this investment will unlock.”

Rongomaiwahine Iwi Trust Chief Executive Moana Rongo said the roading investment is key to growing the economy of Mahia, particularly with forestry interests maturing over the next year.

“This work recognises the safety of our rangatahi, our access and connectivity while growing potential for farmland and our economy.”

Improvement to the Mahia East Coast Road will enable Rocket Lab’s continued growth in the area, with construction currently underway for a second launch pad within Launch Complex 1 which will create more than 15 new roles in the next 12-18 months.

Rocket Lab Launch Complex 1 Manager, Chuck Dowdell, says: “Mahia East Coast Road is a vital link for not just Rocket Lab but also farmers, forestry activity, stock trucks, and Mahia residents and visitors. It’s fantastic to see investment into critical infrastructure like this that will support safer journeys on the Peninsula and long-term growth in the region.”