Rail line back on track 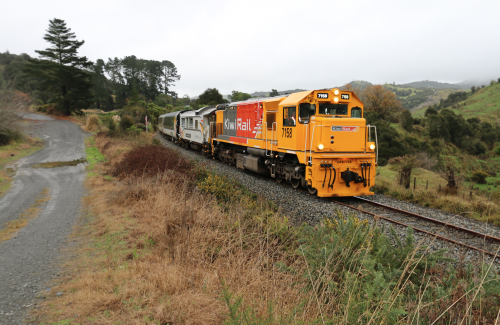 The Wairoa to Napier railway line has reopened with KiwiRail freight trains and log trains back on the tracks over the weekend.

The rail line had been closed for seven-years with the first loaded log train leaving Wairoa for the Port of Napier on Sunday (26/01/20).

The Government invested $6.2 million through the Provincial Growth Fund to reopen the mothballed rail line which was closed after significant storm damage in 2012.

Initially, one of the main sources of freight on the line will be logs from local forests, bound for export through the Port of Napier.

These logs will be loaded onto trains at the new Wairoa yard. Using rail to move these logs takes pressure off the roads and reduces greenhouse gases.

Regional Economic Development Minister Shane Jones said with PGF support the rail line has been rebuilt and KiwiRail has established a road-rail log yard in Wairoa.

“Export log volumes in the Hawke’s Bay region are predicted to reach 3.3 million tonnes per annum in the next few years and remain at high levels until the mid-2030s. The harvest growth around Wairoa is part of that picture.

“Trains will begin running from Wairoa on Saturdays and Sundays, carrying 1400 tonnes of logs each weekend, with more train services expected as harvests increase. That means 5000 fewer truck journeys between Wairoa and Napier a year, as a start.

“If we are to avoid more logging trucks on the region’s roads, keep congestion under control and lower our transport emissions, rail is a necessity.”

Forestry harvests across New Zealand have been increasing since 2008. They are currently at around 36 million tonnes per year and are forecast to remain at high levels for the next decade.

Mr Jones said having options for transporting logs to port ensured a strong supply chain and gave confidence to the forestry industry.

“New Zealand is an export-led economy so the ability to get our goods to port efficiently and safely is crucial.

“That’s why the Coalition Government is focused on an inter-modal approach to transport that makes the best use of trucks and trains.

“It’s also why we have invested $40 million through the Provincial Growth Fund in a regional road-rail hub near Palmerston North.”

KiwiRail expects to employ more people as services increase. Local companies were used to develop the Wairoa log yard, which will be run by ISO Ltd.

As well as regular log trains special rail vehicles will also travel on the railway track for maintenance activities.

With the track back in regular use, it’s important to take special care around the railway tracks and level crossings.

Trains can appear at any time from either direction and it is important people keep themselves and others safe around the railway tracks.

Whether you’re driving or on foot, please remember to look both ways for trains and Always cross with care at an official crossing.

Wairoa Mayor Craig Little is thrilled to see the rail line back in use.

“This is a positive for Wairoa, it will get logging trucks off the road, supports a Wairoa log yard and creates additional employment opportunities.”

Mr Little praised the vision of the Honourable Shane Jones and the Coalition Government for their investment in getting the rail line back up and running.

“This Government has given areas like Wairoa the ability to believe in themselves again and has recognised the importance of rural new Zealand. Before this government we were led to believe that living in rural areas was all doom and gloom was doom. Now the regions are beginning to prosper and grow in confidence.

“It is not expected the rail will have a big impact on the roads initially but the rail option will hopefully reduce any additional logging trucks on the road and in the future my hope is that trucks will be carting from the Wairoa log yard and be based in Wairoa.”

“After seven-years of no rail activity it is really important people take extra care around railway tracks and level crossings. “