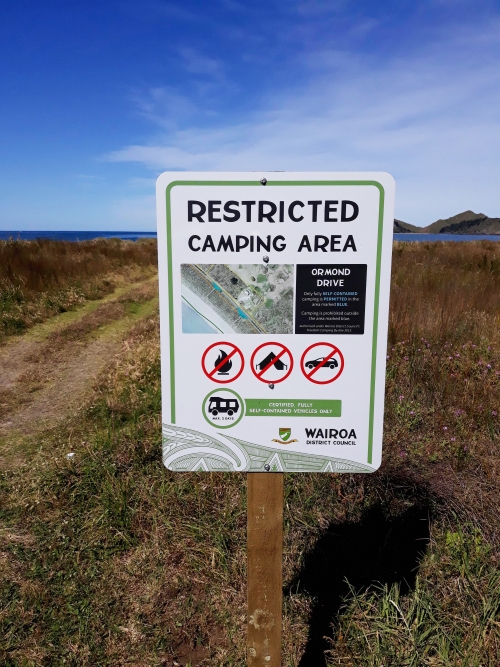 The summer holiday season is fast approaching with freedom camping signage going up around the district.

The Wairoa District Council welcomes responsible campers and encourages visitors to support the conditions at each of the freedom camping sites.

Freedom camping is national legislation that allows people to camp on public land that isn’t a recognised camping ground or holiday park.

Freedom camping is permitted in any local authority area within the district unless it is restricted or prohibited.

Council is increasing its ability to cope with the summertime visitor population explosion.

The initiative will focus on the Mahia Peninsula and Wairoa township, which are the most popular freedom camping areas in the district.

Ambassadors will monitor campsites, rubbish, recycling and toilet facilities with an education and visitor experience focus.

Wairoa District Council chief executive Steven May said the ambassadors will positively engage with freedom campers and visitors to encourage them to camp in the right locations and to vacate areas which are restricted or prohibited.

Visitors are urged to comply with conditions, and if found camping in a prohibited area to please move on and avoid an infringement notice of up to $200.

Council has also focussed on upgrading waste management facilities at Mahia and the installation of a self-contained vehicle waste station.

Funding for the ambassadors and the waste management facilities are part of a $200,000 funding injection through the Central Government Tourism Infrastructure Fund.

Mr May said Council is very appreciative of the funding which has enabled the delivery of improved services without impacting on local ratepayers.

Earlier in the year Council revisited its Freedom Camping Bylaw with a number of changes implemented.

The new bylaw prohibits freedom camping at all sites down Mahia East Coast Road that are past Oraka.

The camping prohibition area will be extended at Mahanga and also introduced at Taylor’s Bay at Mahia and in town at Whakamahi.

The new bylaw also prohibits camping on the grassed area at Clyde Court in Wairoa, the rest of the area will remain as an area where people can freedom camp.

Based on the submissions the Council received when it reviewed its Freedom Camping Bylaw further public consultation will be undertaken in relation to, but not limited to, Oraka, Ormond Drive, Opoutama and Pukenui Drive.

It is likely the new proposal will be considered by Council early next year.