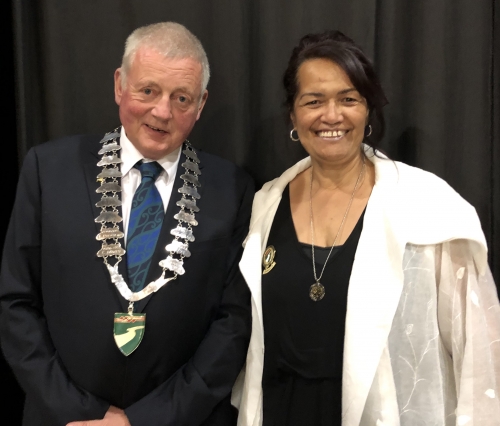 Cr Flood was voted into the position at the Wairoa District Council’s inaugural meeting on Thursday night, which followed the Council swearing-in ceremony.

Council chose to follow the election process with Cr Flood voted in as the Deputy Mayor by the majority of other councillors.

Historically the Deputy Mayor has been appointed by the Mayor.

However, Wairoa Mayor Craig Little said everything Council does is based on a democratic process and having the councillors elect the Deputy Mayor is part of that process and in line with what some other councils are doing.

Cr Flood, who was returned to Council for a third term, is delighted with the Deputy Mayor responsibility.

“This opens the door for opportunities. It is important we use the strength of our new Council to build our people and build our community.

“Every councillor has been chosen to represent, based on their connectedness, their intelligence and their knowledge.

“Our job is to ensure we have outreach so we can make change happen and elevate our town’s wellbeing.

“As a councillor you quickly realise a lot of what we do is driven by legislation and so we have to maximise the opportunities we do have to build our people as that is when the magic happens.

“Being a councillor is being part of a co-ordinated effort to action a point of difference and I am looking forward to working alongside our people, and this exciting new Council, to help make the necessary changes.

“It will also be a privilege to support Mayor Craig Little and assist in driving some really strong initiatives that are being fostered in our community.”

“I am really excited about where our Council and town are heading. We have experience and knowledge through previous councillors such as Denise and Jeremy Harker and we are mixing that up with the enthusiasm and freshness of three new councillors making it an exciting time.”

“I have served on Council with Hine for the past six-years and I know her passion is Wairoa and working to make our district the best it can be for our people.

“I look forward to our new Council stepping forward and continuing to progress our town.

Mr Little also acknowledged the efforts of Cr Denise Eaglesome-Karekare who had served as Deputy Mayor for the past five terms.

“Denise has always been loyal and worked hard for our town, and I know she will continue to deliver, particularly around improvements for rangatahi and employment opportunities.”