Ian Macdonald, Group Manager of the Hawke’s Bay Civil Defence Emergency Management Group, said with the regional coordination centre based in Hastings it is important staff had an appreciation of the key locations in the Wairoa community’s response to a disaster.

The team also took the opportunity to visit the Wairoa Hospital with the facility an essential part of the response to a disaster in the Wairoa district.

“Wairoa has the potential to be cut off for a number of days in a major event, and the hospital facility would play a crucial part in any response.”

The team also familiarised themselves with the Wairoa town tsunami routes and safe areas near the cemetery.

Wairoa District Council chief executive Steven May said in the case of any emergency it is vital that authorities and the community have the best preparation in place as possible.

“We cannot always control the emergency but being prepared as best as we can before disaster strikes enables us to unroll appropriate actions.”

The free public talk will be presented by leading New Zealand scientists from GNS Science and NIWA, who will explain the work they have been carrying out on the subduction zone.

Hawke’s Bay Civil Defence and Emergency Management staff will also be in attendance.

It runs offshore from the east of Gisborne down to the top of the South Island and poses a significant earthquake and tsunami risk to the entire east coast of New Zealand.

The presentation will be held at the War Memorial Hall on Thursday, August 8, from 6pm. 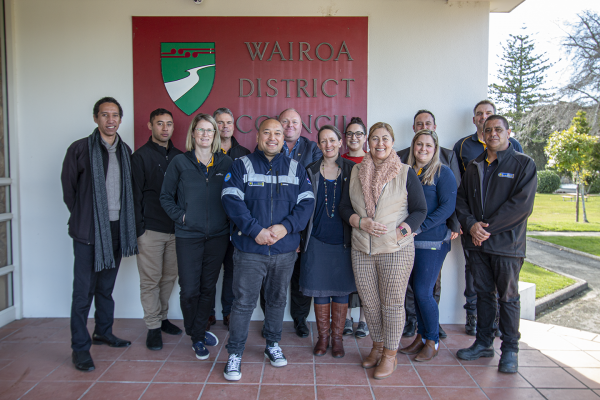 Wairoa District Council staff, particularly those with a focus on Civil Defence, met with members of the Hawke’s Bay Civil Defence Emergency Management Group in a meeting in Wairoa recently.