Building relationships for a strong whānau 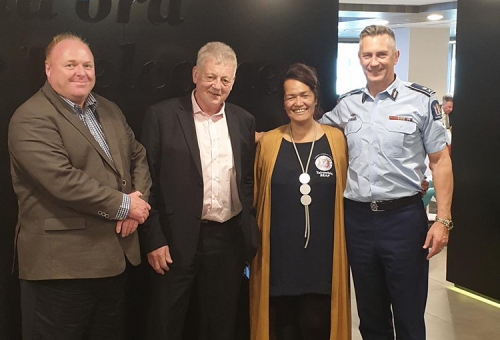 The Wairoa District Council is thrilled with the relationship it has developed with the Police, particularly at a national level.

Recently Wairoa Mayor Craig Little, councillor Hine Flood and chief executive Steven May had a chance encounter with Police Commissioner Mike Bush at the Wellington Airport while on their way back from the Local Government New Zealand conference.

Mr Little said it was enlightening to hear Commissioner Bush talk about the positive outlook of Policing in the Wairoa district and the fact he knew what was happening in our district, had knowledge of the area and was very aware Police had been responding to the challenges.

“A few months ago, Council passed on the comments we were receiving from local people telling us they were feeling intimidated, particularly around an increased gang presence.

“The last thing we want is for locals and visitors to feel unsafe or intimidated.

“We raised the community concerns with Wairoa Police senior sergeant Tony Bates and met with the Deputy Police Commissioner, Assistant Police Commissioner and Area Commander to raise concerns around the increase in methamphetamine usage and the growing gang presence in town.

“It was encouraging to see an increased Police presence so quickly after we raised our concerns, with the extra officers focussing on crime and gangs.

“While Policing is not a Council role it is our duty to advocate on behalf of our community.

“We were thrilled with the Police Commissioner’s level of knowledge about Wairoa which indicates the significance of the relationship in helping to build resilient and thriving whānau and communities.”