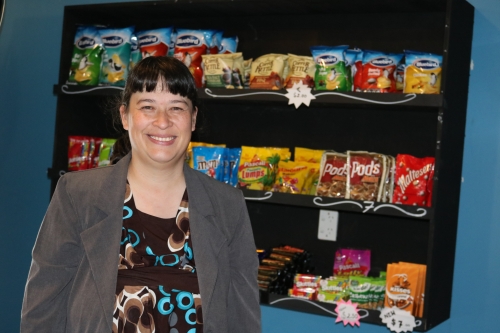 Natasha Loh is a born and bred Aucklander who applied for a Wairoa District Council customer services position. During the interview, it became apparent Natasha’s skills were very much in the entertainment and movie arena with her new job covering both customer services and Gaiety operations officer.

Natasha has a Bachelor of Arts in Anthropology minoring in Maori Studies and a diploma in business computing.

Her true passion though is movies having grown up around her Dad’s Chinese video shop.

She was so keen to get into the industry she sent her CV to 75 different video outlets in Auckland and landed a part-time job at a video shop. From there, she worked her way into a management position.

Natasha managed two video shops and was product manager of the film division of a DVD game and distribution company.

The next step was buying Video Ezy Grey Lynn, and she also established a pop culture shop centred around movies and gaming merchandise.

“My store wasn’t just about Blockbuster movies. I also specialised in classics, tv series and documentaries so I really did have something to suit everyone’s tastes.”

The Auckland Armageddon expo, described as New Zealand’s largest geek, gaming and entertainment event, was a big part of her industry and she had been attending since 2006.

Natasha was also on the Auckland Film Society Committee for ten years from 2006 to 2016 and a monitor for the Auckland International Film Festival for several years.

The shift in video culture saw her shut up shop last year after nearly 10 years in business.

However, a plus for Wairoa is the die-hard movie fan still has around 30,000 DVDs and film and gaming merchandise and hopes to start a Wairoa film club where the audience won’t be short of movies to choose from.

While Natasha is only a few weeks into her shift to Wairoa, she is loving how friendly everyone is and not missing the one-and-a-half-hour commute to work.

“The Gaiety Theatre is a wonderful space, I love movies, but the theatre is more than just a cinema, and I would like to see it being used for more community based and different events.”

Natasha says it is early days, but she is hoping to make Wairoa her new home and is now on the scout for a job for her Auckland based partner, who is a government agency business manager, so he can make the move too.

Wairoa District Council chief executive Steven May said it is great to have someone of Natasha’s calibre on board at the Gaiety.

“She brings a lot of experience and knowledge and we look forward to her working with the community.”