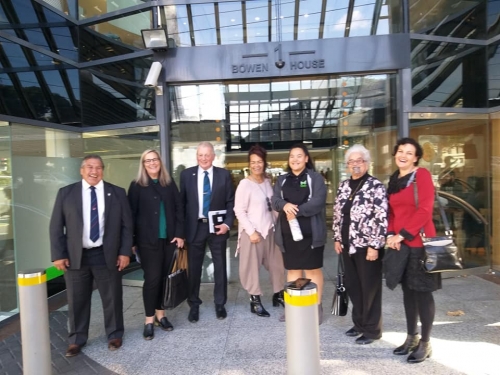 Improving community economic development to lift whanau wellbeing is being pursued by district leaders in partnership with the Central Coalition Government.

Progressing community wellbeing by improving economic and social development is the follow on from last Tuesday’s Kakapa Te Wairoa and Wairoa showcase presentation at Parliament.

The opportunity to present was extended by Ikaroa-Rawhiti MP Meka Whaitiri and gave Wairoa community leaders the forum to showcase its point of difference with all its uniqueness and ingenuity.

Prior to the showcase, a small group presented Kakapa Te Wairoa which featured a range of responses and solutions to Wairoa’s wellbeing state using the district’s cultural richness as its platform.

The document was written by former Wairoa woman Dr Catherine Savage, who has established her own research and development business, Ihi Research, in Christchurch.

Dr Savage said Kakapa Te Wairoa showed the Ministers what Wairoa does well independently of Government funding, and how the Government can engage in Wairoa’s new environment.

“This is about building on the strengths Wairoa has to create a foundation of community-led social innovation and enterprise to bring about sustained change.”

Dr Savage said the proposal is about spreading capability to tackle big issues in social, education and health, in partnership with the state.

“Wairoa has signalled it wants to lead its own change by creating novel solutions that respond to the local interests and values of the community; and where the whānau has control over the process and outcomes.

“The coalition Government’s wellbeing budget oﬀers an unprecedented opportunity for social investment in our community.

“This is the time for Wairoa to pioneer social transformation and demonstrate collective eﬀort to enhance the wellbeing of all people, shifting our town from a ‘welfare state’ to a ‘wellbeing state’.”

“The answer to our challenges lies in our people, investing in our community, and building our own capability to bring about intergenerational sustained change and wellbeing.”

“Our next step is to formulate a strategic approach so we can formalise and progress from where we left off last week.

Mr Little said the Kakapa Te Wairoa document is a follow on from the findings of the economic development report ‘Whakarauora - The regeneration of Long Water’ which was produced by the Giblin Group and funded through the Provincial Growth Fund.

“We know we were listened to by the Ministers with immediate support pledged by Attorney General Economic Development Minister David Parker for Wairoa’s gaming and coding initiative.

Mr Little praised the vision of local MP Meka Whaitiri who arranged the Wairoa presentation so the rest of parliament could see Wairoa’s uniqueness.

“The Ministers who attended our presentation and showcase were blown away by what our small town is achieving and our united front.

“Shane Jones reiterated his comments that Wairoa was the first place he visited after being elected and he told me he understands our district.

“We do have social issues in Wairoa, but we also have a very strong, resilient and accepting community. We are now looking forward to working with Central Government to do things differently and make a change for our future.”

Tātau Tātau o Te Wairoa chairman Leon Symes said the presentation was a good show of unity from the community and was well received.

“Our approach is around long-term sustainable changes that will make a difference. We need a new approach for small communities so we can reverse some of the statistics and create a country where everyone is on the same footing and can make the most of the opportunities that are out there.

“We all want the same outcome, we presented collectively, and the ball is now in the Crown’s court.”

Wairoa District Councillor Hine Flood said the presentation and showcase were about demonstrating to the Ministers and dignitaries that we can work together as community leaders and that through the Community Partnerships Group we are already demonstrating a proactive relationship with commissioners and regional managers.

“We were also deliberate in sharing the presentation amongst the delegation from our kuia, Mana Hunkin, community leaders and our mokopuna who had the last say.

“This is about the current and future citizens of our Wairoa. I am confident the strategy worked based on the interest from the Ministers and the questions they asked of us.

“We asked for a different and innovative engagement with Ministers to lift our people to a state of wellbeing.

“Our priority is to change the wellbeing of our community, and as a result, our economic state will shift.
A lot of the background work to reach the Kakapa Te Wairoa document stage has been made possible through Wairoa’s ambitious Community Partnership Group.

Mr Little, who was a key instigator and chairman of the group, said the concept was born out of a need to have representation from local, regional, intersectoral and interagency decision-makers who make decisions that have a bearing on the people of the Wairoa district.

The group was formed two years ago with the aspiration that all whānau across the Wairoa district are thriving.

“We were concerned there was a lot of money coming into the district, and activities being carried out, but there were still gaps in services, and not everyone knew what was happening.

“The Community Partnership Group is about providing the people of the Wairoa district with united leadership that works together to allow for joined-up community planning and a whole of community and government approach to making change.

“The group is already assisting with monetary contributions from Community Partnership Group members to make the Parliament and beehive opportunity possible for the district to achieve.

“It’s taken a lot to get to where we have, which we knew it would, and we have gained a lot of traction over the past year and are working towards achieving a more united community.”