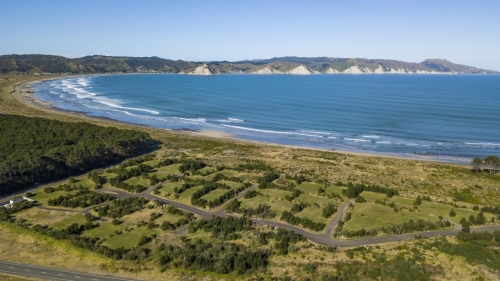 The Blue Bay Opoutama drinking water upgrade has been put on hold following an intervention by the Hawke’s Bay District Health Board Medical Officer of Health.

The decision by Dr Nick Jones to become an official interested party means the process would incur long delays and an alternative supply site is likely to be needed which will significantly increase costs.

The issue was discussed at Tuesday’s Wairoa District Council Infrastructure Committee meeting with councillors told the necessary upgrade could now cost significantly above the budgeted $215,000.

The process has now been halted while councillors review the options and costings and continue to consult with the affected property owners.

Wairoa District Council staff have spent most of the year working towards a suitable water supply for the Blue Bay subdivision, and a solution had been reached and recommended as appropriate by the Ministry of Health’s Drinking Water Assessor.

Advice to Council from the Ministry of Health Drinking Water Assessor was that the existing water bore could be used providing Council met conditions of an approved water safety plan and because the existing bore is in a treated wastewater effluent disposal plume the increased risk must be managed.

The request by the Medical Officer of Health is based on concerns around abstracting raw water from an area that is influenced by a treated wastewater effluent discharge, despite the proposed treatment process exceeding the requirements of the Drinking Water Standards.

Council initially believed the existing Blue Bay bore would not be suitable because it is inside the area influenced by the treated wastewater plume, and identified seven alternative water supply sites with the preferred location at Ormond Road east of the railway line.

The concept of using the existing bore was discussed at a joint meeting with the Hawke’s Bay Regional Council and Drinking Water Assessor.

At that time the DWA had no issue using section 10 of the Drinking Water Standards provided they approved a water safety plan, and because the existing bore is in a treated wastewater effluent disposal plume, the increased risk must be managed.

Based on those meetings Council considered it reasonable to proceed with using the existing bore and treat the water through a process that exceeded the requirements of the Drinking Water Standards and incorporated a series of multiple barriers.

A Water Safety Plan was prepared by OPUS and approved by the Drinking Water Assessor.

The Medical Officer of Health’s intervention effectively shut down the proposal that until that time was recommended by the DWA as appropriate.

The new status of the application meant a hearing would be required and regardless of the outcome the process could cost around $100,000.

Wairoa District Council chief executive Steven May said the Blue Bay application is the first new water supply in the Hawke’s Bay region since the Havelock North incident with everyone very aware of the consequences of not meeting the most stringent requirements.

“For us, it is unfortunate timing as it is a new playing field, even for a supply as small as Blue Bay.”

“Council believed it was on the right track and it is disappointing to now have to start again, but equally there is no room for error, we must err on the side of caution, and we must get this right.”

“A safe water supply, for now, and into the future, is paramount.

“It needs to be remembered the original Blue Bay water supply was built by a private contractor to meet the requirements at the time.

“Council inherited the water supply, and it does not comply with today’s standards.

“Council’s expectation was that the water supply upgrade would be completed in time for the summer holidays and we apologise that this will now not happen.

“There is a broad range of options we need to consider in order to ensure a safe water supply that is future proofed.

“We aim to consult with residents as soon as possible to discuss all possibilities regarding a new water supply along with options of rates remissions and the use of water tankers.”