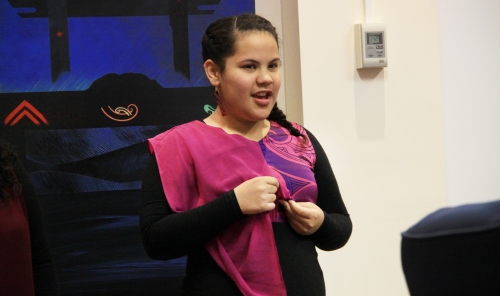 The courage of a 12-year-old kura kaupapa student was on full display this morning as the Wairoa District Council deliberated on its Te Reo Māori Policy.

Rongomaiwahine Te Rau o Patuwai’s submission to councillors was the icing on the cake as Council formally adopted its policy, a living document that has been strongly supported by its community. 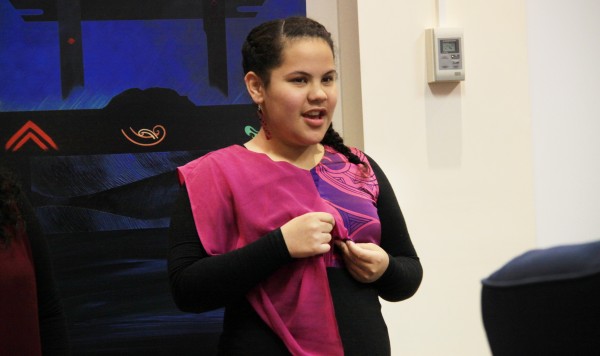 The brave Rongomaiwahine made a powerful and moving oral submission all in te reo Māori, saying the language was important to her and was a treasure from her ancestors.

She is the daughter of local couple Ropata and Miriama Ainsley, and is a student at Te Kura Kaupapa Māori o Ngāti Kahungunu o Te Wairoa.

“My language is my strength, an ornament of grace… I commend the council for taking the lead with this initiative,” she said.

The Wairoa District Council is now one of the first local government bodies in New Zealand to approve such a policy, which is another stepping stone towards becoming the country’s first bilingual community.

Many of the submissions highlighted how Council’s decision was a vital stepping-stone for Wairoa going forward, and to keep the language alive and well. 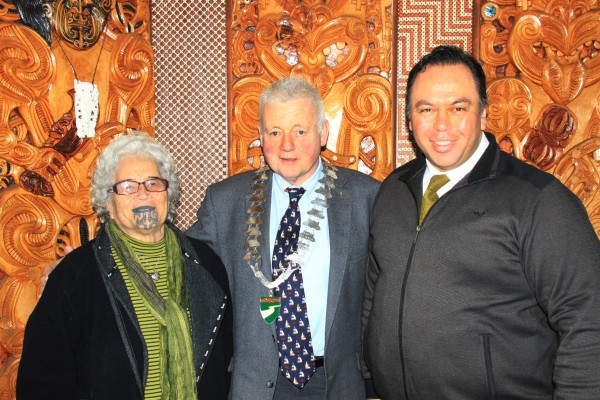 “Many people are under the impression that because we have kura kaupapa and kohanga reo, the language is fine; it is not,” Mrs Hunkin said.

“Te reo Māori is not safe yet… it can only be safe if we are speaking it in our homes and in the workplace… the rest of the country is looking at you, so I urge you Wairoa, be brave.

“I always believe things filter down from the top… you (the Mayor) are the top, and this initiative will filter down through to our community.”

One written submission acknowledged the likes of Sir Turi Carroll, John Scott, Lena Manuel, Tom Cooper and Ramona Eaglesome who were community leaders in areas such as welfare and te reo Māori.

Jeremy Tātere McLeod, director of Te Reo, Tikanga, Matauranga at Ngati Kahungunu Iwi Incorporated (NKII) and the Tairawhiti representative on Te Mātāwai, in his written submission said NKII very much supported this initiative for Te Wairoa to be bilingual.

Mayor Craig Little thanked everyone who submitted their support for the policy, and said Council just needed to get on with it and approve what was before them.

Mr Little said this was the first time submissions were made in te reo Māori in Council chambers.

“I’m just blown away by these submissions, and having you here Liz as the interpreter is awesome,” he said.

“These are the types of things we need to think about moving forward.”

Deputy-Mayor Denise Eaglesome-Karekare, who has been a strong advocate for bilingualism and the Te Reo Māori Policy, fought back tears after she heard young Rongomaiwahine's submission.

"Being at this submissions hearing takes me back to the likes of my mother, Ramona, and all the old people who have now passed... they led the charge in trying to promote te reo Māori in this community," she said.

Council’s Te Reo Māori policy, which is designed to develop and promote te reo Māori throughout the organisation, was implemented this morning after Council heard a number of oral submissions from members of the public.

Council’s Māori Standing Committee Chair Kiwa Hammond says the policy fosters positive attitudes and values about te reo Māori among staff, and the use of it becomes a valued part of the organisation.

“We heard some very strong submissions, which were overwhelmingly supportive of the policy,” Mr Hammond said.

“Wairoa has arguably led the bilingual town conversation over the past five years and continues to lead in terms of local government policy development.

“This policy signifies the Wairoa District Council’s commitment to the language and acknowledges the important status of te reo Māori in our community.

“With a population of almost 60 per cent Māori, and a sizeable Māori-speaking population that is well above the national average, it makes sense that Wairoa lead the way with this policy.

“We support any initiative that promotes the use of the Māori language. Our proposed Te Reo Māori Policy will enable our district to further support the Te Wairoa Reorua 2040/bilingual Wairoa initiative.

“I applaud any other district that promotes the use of te reo Māori. This isn’t a competition, because at the end of the day, the real winner is te reo Māori.”