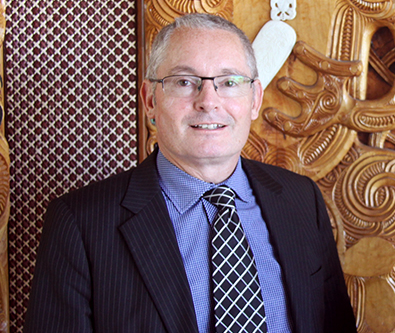 Wairoa District Council CEO Fergus Power has announced his resignation after three years at the helm of Council.

Mr Little said that he was surprised to receive Mr Power's resignation, but wishes to acknowledge his contribution to the Wairoa district and to Council.

"This Council was elected on a platform of change and we appointed Fergus as the CEO to assist us to implement a vision to see Wairoa thriving now and into the future," Mr Little said.

"We certainly didn't subscribe to the view that Wairoa was a dying town. We committed to working hard to changing this and realised that we needed to shake things up a bit to prove that Wairoa could punch above its weight.

"We had a vision to halt population decline, change the perception of Wairoa and demonstrate that Wairoa is a great place to work, live and play.

"Fergus has been instrumental in assisting us in delivering on that vision.

"We have been through some challenging times over the past three years. The threat of amalgamation was one of the biggest decisions our community and region had to decide on and Wairoa led the charge in opposing amalgamation within Hawke's Bay.

"We have come out the other side and the leadership shown during this time needs to be commended.

"A steady safe pair of hands managing the day to day affairs of Council whilst at the same time bringing innovative and new thinking to how we now do things here.

"Who would have thought that we would see Rockets being blasted off from our district?

"Because of the great work that Fergus and the staff at Council have done over the past few years, we can confidently say that Wairoa is now firmly on the world stage.

"I have absolute confidence in our staff and want to congratulate them for all the work that they do for our community.

"Under the stewardship of Fergus, our staff have been able to unshackle themselves and prove that the Wairoa district has a promising future and has the capability to realise its full potential.

"I can confidently now say that Wairoa has the ability to match and or better any other Council in the country."

"His calm exterior and measured approach to speaking belies the countless ideas and enthusiasm he has generated in the name of growing opportunities throughout the Wairoa District," Mr Hammond said.

"His support for the work of the Māori Standing Committee has been invaluable as we navigated many of the local government issues of great importance to Māori and the Wairoa Community as a whole.

"He has certainly set a very high benchmark for whoever eventually takes over his role and we wish him further success in his new role."

The process to appoint a new CEO is currently underway and Council is excited to see what these new opportunities bring for Wairoa.

"We have two proposals that Council will be discussing in terms of the appointment process going forward and I have absolute confidence in our Councillors that we'll be able to make an appointment that continues our vision to make Wairoa a great place to be," said Mr Little.

"Fergus leaves a lasting legacy for our district. The Waitaki District Council will gain a great CEO and I on behalf of Council and the community of Wairoa wish Fergus and Tri all the best in their future endeavours."