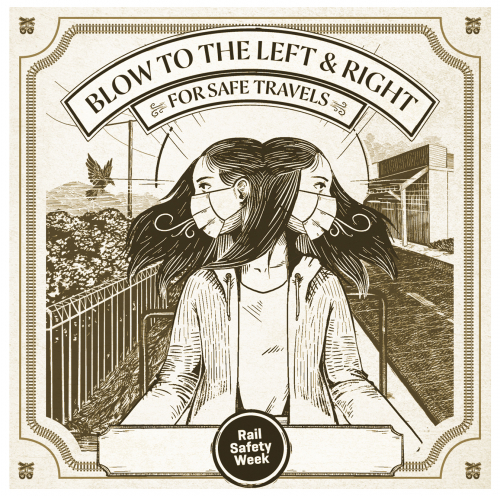 Our friends at KiwiRail are getting on board with a new superstition.  Blow to the left and right for safe travels before you cross rail tracks.

Whether you’re driving, cycling or walking, all it takes is a little puff each way – it works with a mask on too.  You might even spot a train while you’re at it.  Coincidentally, of course.

The campaign aims to raise awareness about rail safety and to encourage safe behaviour around trains, railway tracks and level crossings.

This year, as part of the campaign, a superstition is being promoted to encourage safety at level crossings. The superstition doing the rounds is ‘Blow left, blow right, for safe travels’.

Rather than simply telling people to expect trains, or warning about the dangers of making poor decisions, people are being encouraged to look left and right at level crossings.

While Kiwirail is not encouraging leaving things to luck, it is on board with this new superstition, especially as this one might keep you safe.

If a little bit of superstition gets people looking both ways before they cross, then Kiwirail is happy.

In the past ten years, 155 people, cyclists, and motorists have died from collisions with trains in New Zealand, with 56 of those deaths at level crossings.

In the year to 30 June 2022, there were 28 collisions at level crossings. 23 of these involved motorists and five involved people. This is lower than 2018 (34) but more than twice than last year (13). Eight people lost their lives at crossings and on the open track. Many more were seriously injured. Of the 28 collisions, 61 per cent were at level crossings which already have half arm barriers and/or flashing lights and bells. This compares to seven out of 13 collisions, or 53 per cent last year.

If you’re out and about, whenever you see rail tracks, take a moment to blow left and right for safe travels. You might even see a train while you’re at it. Coincidentally, of course.