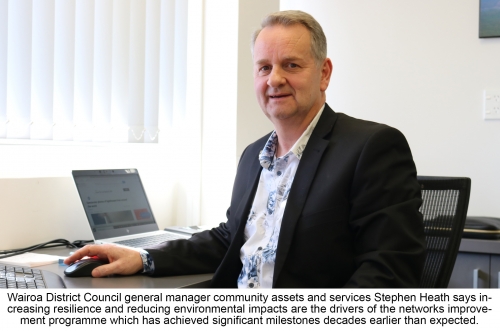 The approach began in late 2017 with pumpstations, pipe relining, illegal connections on private properties and water loss focussed on.

Mr Heath said the project has been underpinned by Wairoa wanting to ensure its infrastructure investment was fully compliant with increased environmental standards.

“Wairoa’s main problem was infiltration and inflow, in a nutshell, stormwater getting into the sewer network, meaning we were treating 10-15 times more wastewater than we should have been.

“The Three Waters stimulus funding has enabled us to roll out a water meter upgrade to around 2,500 households with connections fitted with new compliant water toby systems with a back flow prevention manifold, and smart meters. Through this $2.9 million Government funded project we expect to achieve a water loss target of 3% by 2024.

“We have focussed on repairing where we can, replacing where we must, and building new only when necessary.

“The sewer network improvements and water loss programme has been a huge undertaking, but the positive results have also been staggering.

“Before this work, Council was experiencing a negative financial impact of prematurely wearing out the sewage system and having to repair and replace assets sooner, high costs for electricity and pumps and negative environmental impacts through unconsented pumpstation overflows.

“We had no resilience; it would take us two weeks to recover from a 50mm rain event with our pumpstations overflowing and operating off the scale dealing with 600,000 litres of wastewater per hour.

“Earlier this year we had a 56mm rainfall event and had no pump station overflows with the maximum volume pumped reduced by less than half to 271,000 litres per hour and we recovered within one day.”

Project work has included cameras through 40% of the network and around four kilometres of pipes relined. Four hundred Wairoa properties that had illegal stormwater connections running into the sewer network have been fixed.

The electricity costs at the Fitzroy pump station over a comparable five-month period reduced from $22,500 to $9800.

“Massive rainfall used to be a scary time because we knew our systems could not cope. This work has enabled a substantial shift and through reduced volumes we have been able to significantly improve our resilience, our costings and our environmental impact.”

Mr Heath said he is always available to answer questions from members of the public and take people on site visits.
Chairman of Council’s Infrastructure Committee Chaans Tumataroa-Clarke said to make such significant gains in such a short time frame is a fantastic result.

“In particular we acknowledge Stephen Heath’s leadership, and the work of his staff.

“Council had a plan, staff rolled up their sleeves and got stuck in and as a result we have achieved a milestone that we thought we wouldn’t reach for decades. This is just the start of our journey and the flow on effects from a financial, environmental and sustainable perspective will all go towards making our service delivery stronger.”

These sentiments were echoed by Mayor Craig Little who said infiltration has been problematic for years and elected members are very supportive of the work being carried out by Stephen and his team.

“We are living in a volatile and changing environment. We have the threat of the Three Wasters Reform and Council’s losing their assets and are continually facing changing legislation and regulations.

“Stephen’s leadership style is developing high-performing teams which produce a proactive and predictive approach with a no blame culture. By focussing on the problem and developing hybrid solutions we are seeing outstanding results. This result is a tribute to the entire team, both staff and contractors, who have played in a part in reaching this achievement.”