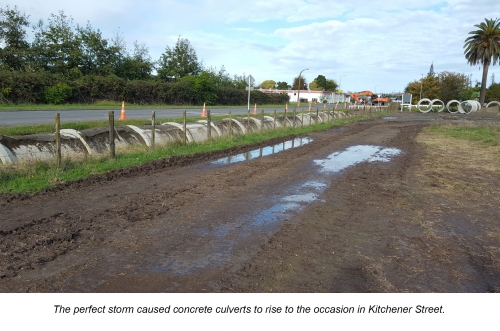 The completion of the Kitchener Street drain piping has been delayed after last week’s heavy rain event caused the concrete culverts to float to the surface.

Last Tuesday/Wednesday’s weather event saw 70mm of rain fall in town over 24 hours with a peak of 27mm within one hour.

The weather bomb created the perfect storm in Kitchener Street with the 4.2 tonne culverts at installation stage.

Flotation issues are not usually a problem with heavy concrete culverts but last week’s intense rainfall caused the culverts to rise and float.

Wairoa District Council’s engineering team said they had never seen anything like this before, adding the uplift pressure of the rain pooling in the bottom of the drain compromised the stability of the culverts causing them to float.

Contractors Fulton Hogan and Council engineers said at the end of the day it was a freak incident where the timing of the stage of the work, alongside the weight of the culverts were just not enough against the uplift of pressure.

The culverts will need to be removed and re-laid which will delay the project completion by a few weeks.

Insurance options are being considered to cover the remedial work and further options will be investigated to mitigate the issue from re-occurring again.

Last year around245m of concrete culverting was laid in Kitchener Street as part of a Wairoa District Council plan to future-proof the town’s stormwater network.

The continuation of the project has been made possible through confirmation of Waka Kotahi NZ Transport Agency funding and budgets.