Naming of new bridge at Whakaki 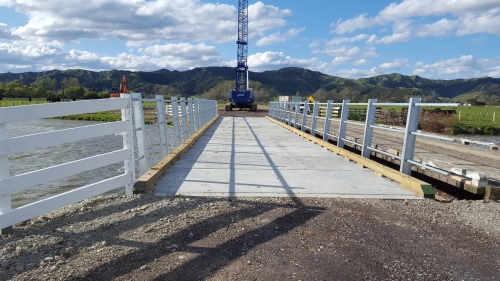 The new and recently opened bridge at Whakaki will now be officially known as The Landing.

At Tuesday’s Council meeting councillors agreed to name the new bridge The Landing, which is the name given to the old bridge by the hau kāinga and has been in use for the last four generations.

A Cultural Impact Assessment completed last month determined that using the name Pātangata is not accurate as the actual locality known as Pātangata is much further down Te Rāhui Channel.

The bridge site has always been a crossing point and landing place for waka coming off the lake or travelling from one side to the other to get to the Te Korotere Pā and urupā.

One local person said it was appropriate that the name be officially changed to the Landing. “That is what local people know it as and is representative of waka landing in that area. Renaming the bridge, The Landing, is part of keeping the history and tradition of the Whakaki area alive.”

The renaming was completed in collaboration with the Whakaki Lake Trust, The Whakaki Marae Trust, and the Maori Standing Committee.

The bridge was officially opened earlier this month with the bridge replacement funded through the Provincial Growth Fund.