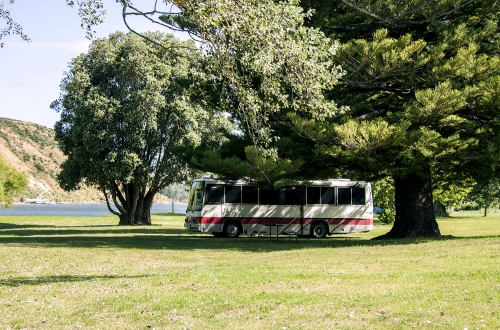 Freedom campers were a lot more compliant over the holiday season.

Wairoa District Council compliance team leader Paul van Dorrestein is thrilled with the improvement and the fact the correct messages are getting out and being heard.

Over the Christmas/New Year summer break around 100 notices were issued, well down on the previous holiday period when 167 were issued.

“We have replaced signs, developed new brochures and a Freedom Camping booklet plus there is a range of updated information on Council’s website.

“The i-Site staff have also been great about spreading the correct information.”

This season there was also a demographic change in the notices issued with around 60 percent of the notices going to national visitors and 40 percent to international.

On occasions, Police assisted Council staff with their patrols and in general people who were approached were receptive.

“The fine for camping in a non-designated camping area is $200 per vehicle which certainly helps serve as a deterrent.

“Nine out of 10 people take it in their stride, and if we have time, we help relocate them to a spot where they are legally allowed to park.

In town, there were also regular patrols particularly around the popular spots at Whakamahia, Pilot Hill, Clyde Court and Memorial Park.

Around 30 percent of the infringements were town based with the rest from the Mahia area.

“We are definitely heading in the right direction. It is great that the information we are putting out there is being used to help make people compliant. We will continue to fine-tune our education messages, and we appreciative that most people are trying to do the right thing.

“I think we are well on the way to reducing the number of infringement notices we issue.”

Wairoa Mayor Craig Little said everyone knows the Wairoa district is a popular tourist destination and Council wants to encourage that but also needs visitors to be abiding by the rules.

“It is fantastic to see have less infringement notices issued, that is our goal.

“It’s a shame there are always a few inconsiderate people who push the boundaries and we will continue to try to deal with them. However, I do commend the 90 plus percent who do the right thing.

“Congratulations to Council staff who have proactively worked to encourage compliance and also thank you for the long hours they worked over the holiday period to ensure the correct information was getting out there.”